The following content is a part of an FGD between NBRI and the upstream and downstream EV battery industrial players. The FGD invited leaders of several state-owned corporations, all of which were involved in a consortium that aims to nationally develop the battery economy using Indonesian resources for Indonesian profit. The consortium has plans to develop the industry all the way from downstream to upstream.

MIND ID, and its role in developing the downstream industry 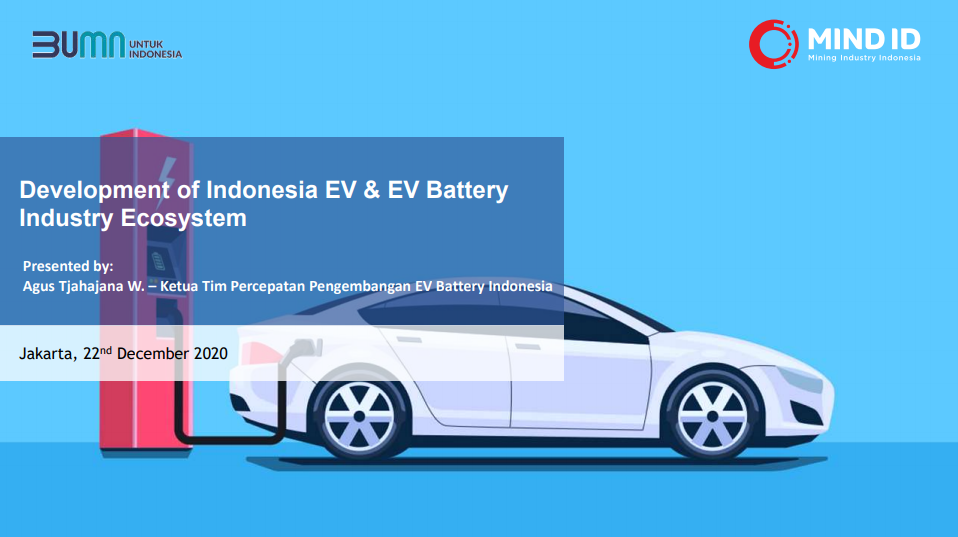 EV technology is taking the world by storm due to rising concerns for the global environment. By 2040, more than half of the automative industry will be occupied by electric alternatives, with higher penetrations in regions such as China and EU. Meanwhile, Indonesia is trying to find steady footing in the global EV market.

Currently, Indonesia has the largest potential to be the biggest BEV industry player in South East Asia. It is very likely for the country to become the regional hub for the battery electric vehicle industry sometime in the near future if the correct steps are taken by national stakeholders. The nation has the power to serve up an astounding number, up to 340 thousand units of electric vehicle anually by 2030.

Nickel is a key element in Li-ion batteries. Meanwhile, Indonesia has the biggest nickel reserve in the world and the largest nickel producing capacity worldwide. Provided that the nation masters the technology of battery manufacture, it is perfectly equipped with the material needed to give the nation a competitive edge in the global market. This is due to the fact that batteries hold 35% of the entire value in the BEV manufacturing process.

The domestic EV battery and ESS demands are also of concern. Based on the base case scenario, BEV and ESS is expected to have a 29% penetration rate into the national automotive industry by 2035, with 1.8 - 2.7 million units Electric Motor Cycles and 0.3 - 0.6 million units of EV cars sold in the country. The scenario also detailed how Indonesia has the potential to become the top two supplier of imported EV in South East Asia, and to implement ESS in renewable energy co-location, peak power provisions, etc.

Combining the massive potential with the equally massive porjected demand in the future, the right moves by state-owned companies can translate to a massive EV industry in Indonesia in the near future.

MIND ID holds ambitious plans for the Indonesian SOE around the battery economy by the year 2025 as the state-owned mining corporation. First, it intends to become a global upstream player as a battery material provider. Second, it plans to play a role as a global midstream player in cathode material manufacture. And finally, it aims to play a role regionally and domestically as a downstream player in the battery and xEV industry. MIND ID is currently looking to develop a nationwide battery ecosystem and seeking to expand its consortium partnerships with multiple companies, 6 of which are potential partners from international players in the industry. 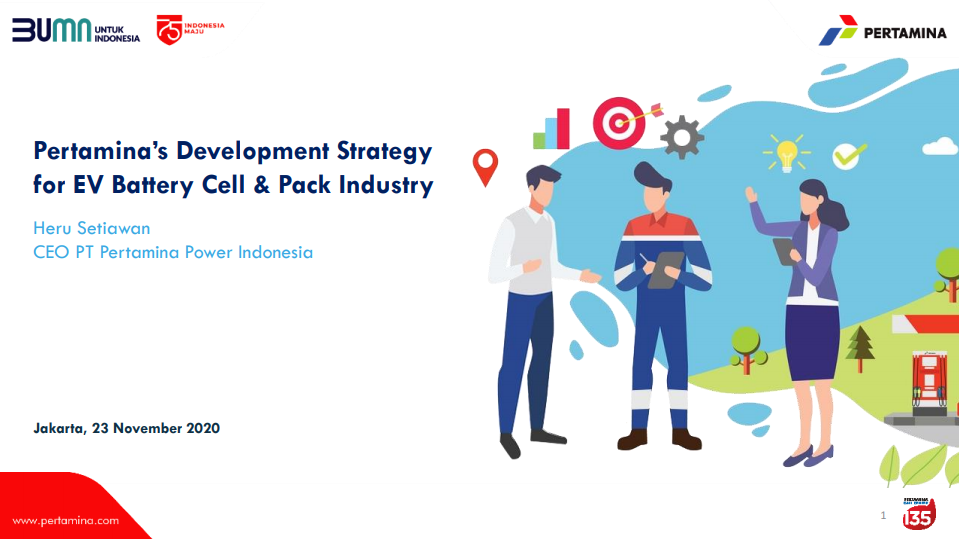 As the global concern for the environment became more prevalent, green house gas emissions from every particular industry were put to light. In Indonesia specifically, the concern of emissions related to the transportation industry is particularly disruptive. This concern raises the discussion to a shift towards more environmentally friendlier options. Pertamina, the state-owned oil & gas corporation, have prepared a strategy to accomodate and accelerate the national shift towards developing the national electric vehicle (EV) battery industry.

Pertamina's scope of concerns mainly lie somewhere between supplying the battery precursor materials all the way to the recycling of spent Li-ion batteries. This includes, and not limited to battery manufacture, EV production, ESS development, implementation of charging stations. The corporation plans to enter directly in all parts of the EV ecosystem to induce and encourage market demand. They intend to optimize Pertamina's role in EV battery value chain and ecosystem by building hybrid power plants, EV charging and battery swapping stations, as well as to play a role in the manufacture of BEV parts such as tires, interior upholstery, and using the MyPertamina app for EV management systems.

They are also supported by partnerships with various stakeholders in battery technology, OEM, and power generation. The consortium aims for an integrated upstream to downstream supply chain. A partnership with BPPT for an implementation of charging stations and CSMS development, with BSN for standardization, and with universities such as UNS (Sebelas Maret University) and ITB (Bandung Institute of Technology) for the development and study of battery prototypes and swapping systems.

Pertamina and the consortium also expects a couple challenges for EV battery industry development in the future. First, battery technology is expected to grow beyond nickel by 2040. Second, major global battery industry players such as CATL and TESLA are upcoming competitors in the national industry. Third, the Indonesian government lacks policies and incentives that pushes the growth of the BEV industry. Moving forward, we should look to other nations as benchmarks in limitting ICE usage, handing out industrial subsidies to BEV developers, and pushing the growth of the national BEV industry through the global market demand.

PLN as a national developer for the EV infrastructure

In developing the EV infrastructure, PLN has a focus that revolves around four major core principles. These are green, innovative, lean, and customer-focused. These principles are spearheaded by some of its' most recent and ongoing breakthroughs such as 5.0 GW Green Energy, Green Boosters, large scale renewable energy implementation, the construction of a holistic EV infrastrcture, and the relaunching of PLN Mobile. To ensure these four core principles are well done, there are five consecutive strategies that PLN is ready to implement. The first of which involves the massive move for renewable energy supply so as to make sure that oil used to power conventional vehicles is simply replaced by coal, an equally, if not more destructive, fossil fuel source. Secondly, PLN aims to play a huge part as a shareholder in the Indonesian EV battery holding by investing and establishing partenrships with stakeholder support. Next, PLN intends to implement EV charging stations and battery swapping stations to push the adoptien rate growth of electric vehicles in Indonesia. This is followed by the implementation of ESS nation wide for quality and reliability improvement. Finally, PLN ensures that power quality will be supported all throughout its operation as the state-owned power company.

The infrastructure around EV revolves around three major facilities, reliable home charging (used by 80% of EV users), public charging stations (around 10% of EV users), and fast charging in the form of battery swapping stations (a measly 5% of the entire EV user demographic). As home charging is the most commonly used, PLN is planning to ensure the successful implementation of a comprehensive integrated system to track, bill, and ease EV users. PLN is close to finishing the implementation of a CSMS (Charging Station Management System) that monitors EV charging activities nationwide. The CSMS is a cloud-based platform that pulls data from EVs, synchronizes the data, and pushes the data to a central AP2T-P2APST system. The AP2T-P2APST processes monthly post-paid billing and post-paid tokens to send directly to the customer, along with the discounts that come along as an incentive for EV owners. This will all be easily monitored by the customer through an application. The application, Charging.In will connect OCPC gateway, mobile service and payment gateway in order to effectively act as a one stop shop for EV users and will also enable the monitoring of public charging stations' availability.

Energy storage systems, or ESS, have five major implementation plans in Indonesia. First, ESS can be used for the utilization of portable batteries to supply electricity in rural areas. Second, ESS of course will resolve the intermittency problem inherent in renewable energy generation. Third, ESS allows renewable energy co-location that allows the push for maximizing electrification in Indonesia's most remote areas. Fourth, ESS will be used for peak power provisioning in major cities. Finally, ESS can be used to provision the best services PLN has to offer to its most premium patrons.

To conclude, PLN, as the Indonesian national power company, will play a huge role in supporting the transition of the automotive industry by playing a key part in the infrastructure that must follow the maturation of the battery EV market.

The consortium lists several high-profile state-owned companies that all aim to build a healthy, vigorous battery-based EV economy from the ground up. Furthermore, the consortium has also managed to build partnernships with universities and state organizations to build the economy in a more holistic manner. This unified movement has great potential to realize a robust ecosystem within Indonesia's borders that contribute to the overall welfare of its people.