As of 2019, Indonesia is the world’s fourth largest producer of greenhouse gases (Dunne, 2019). In 2018, the nation’s Directorate General of Climate Change gave a report concerning the national greenhouse gas emissions from 2000 to 2016. In most years, where peat megafires aren’t a common occurrence, emissions for energy needs, which includes electricity generation and fuel consumption, tends to occupy a majority of the greenhouse gases emissions. This is evident in 2016 where energy consumption produced the highest amount of greenhouse gases of approximately 600,000 Gg CO2e (gigagrams of carbon dioxide equivalent) (Boer, 2018). In an attempt to fulfill its goals in the Paris Agreement of a 41% emission reduction by 2030, the 55th Presidential Decree of 2019 addresses the planned transition from ICE vehicles to battery driven EV in the Indonesian automotive landscape.
The aforementioned Presidential Decree describes several policies that are enacted to incentivize the public into adopting EV for everyday private transportation necessities. For EV owners, some of these include tax reductions, traffic law leniencies, and even a carbon tax to discourage further ICE vehicle usage and ownership. Meanwhile, subsidies were also described to encourage the construction and implementation of sufficient charging stations nationwide that should address the concerns for limited EV travel range. A scenario involving the maximization these incentives predicts 585,000 units of EV sold and 11,561 MWh of Li-ion batteries produced by the year 2030.

Catering to the Indonesian transportation ecosystem

Figure 1 illustrates the share of the national motorized vehicle ownership in 2018. Based on the data provided by BPS, motorbikes occupy the vast majority of private vehicle ownership in Indonesia with an outstanding share of 82%. Thus, attracting more ownership of an EV alternative to conventional scooters might be a solution to accelerate EV adoption in the Indonesian transportation ecosystem. 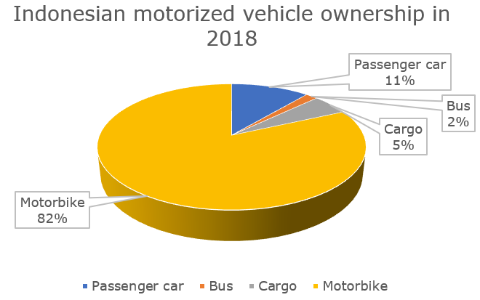 One of the most readily available EV alternative to motorbikes in Indonesia is the GESITS electric scooter, created through a combined effort from Garansindo and Sepuluh Nopember Institute of Technology (ITS). Performance-wise, the GESITS electric scooter is capable of driving through 85 – 100 kilometers in a single charge while reaching speeds of up to 70 km/h. Although the performance seems fitting for uses in an urban setting, the main challenge of mass adoption of GESITS in the market may be its relatively high selling price of 28 – 30 million rupiahs. Compared to its conventional counterparts, that price is set relatively high and may be less attractive as well as less affordable for much of the population most likely to utilize motorbikes for their daily commute. To handle this problem, as EV batteries will become better and cheaper in the future (Curry, 2017), more electric motorbike models should be developed as soon as possible nationwide. More option in the marketplace will lead to a significant decrease in overall price, making electric scooters more available and further encouraging a wide adoption in Indonesian transportation.
If the main focus is to make a more sustainable transportation ecosystem with less greenhouses gas emissions, an electric public transportation may be another desirable solution. The shift from privately owned motorized vehicles to public transport has long been acknowledged as highly advantageous for cities due to significant fuel consumption reduction while simultaneously increasing the available space on roads which gives better traffic conditions (Borén, 2020). Furthermore, an electric public transportation system, most likely in the form of public buses, resolves the concern for charging stations by using a centralized charging facility where buses are allowed to charge interchangeably (maybe even automatically) throughout their daily operation. While the public transportation environment is not yet sufficiently robust, an electric public transportation system presents itself as a highly attractive solution that can reduce greenhouse gas emissions in a significant manner while also supporting the EV industry that is coming to Indonesia.