The founder of NBRI, Prof. Evvy Kartini, was a part of a webinar held by Universitas Dian Nusantara (UNDIRA). The webinar focused on the transition towards environmentally friendly renewable energy technologies. The webinar featured Prof. Dr. H. Suharyadi, MS as the Rector of UNDIRA and Prof. Dr. Djarot S. Wisnubroto as a part of the Standing Advisory Group for Nuclear Energy. 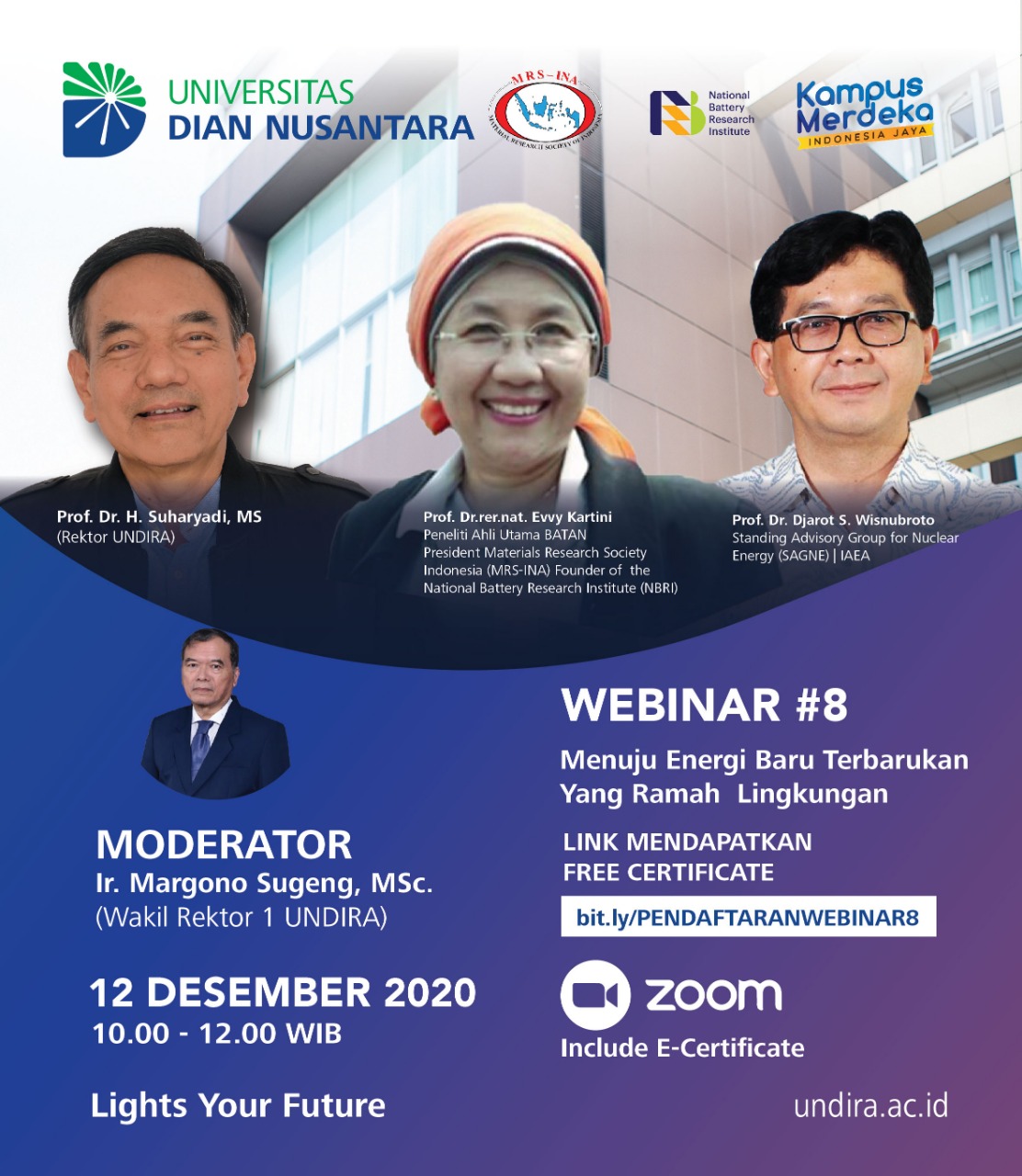 Prof. Suharyadi gave a presentation on the effects of energy consumption towards the industrial sector's productivity. Yearly energy production needs steadily rise, while fossil fuel reserves, such as oil and gas, have been steadily declining. This leads to a massive expected rise in net import of natural gas by 2028. On the other hand, renewable energy resources have massive potentials, up to 442 gigawatts, in Indonesia. This potential, however, has yet to be used. An effective exploitation of renewable resources may lead to decreased national deficits, an increase in national devisa, currency stability, increasing industrial competititveness, and even the decrease of national unemployment numbers.

Next, Prof. Evvy presented the role of batteries in realizing a greener earth by mitigating the adverse effects of climate change. Batteries help solve the intermittent nature of natural renewable energy sources such as wind and solar. Lithium-ion batteries are the most advanced batteries currently available, used in a multitude of high performance applications. This wide range of application, including mobile energy storage needs, is expected to lead to an exponential increase in battery demand until 2030. Furthermore, batteries help the application of EV in the Indonesian transportation ecosystem, which helps the decarbonization of Indonesia's roads. Thus, the adoption of battery technology is expected to employ thousands and absorb a major part of the national workforce.

Prof. Djarot talked about the utilization of nuclear energy sources for national welfare. Contrary to popular opinion, nuclear reactions as well as radiations commonly occur in the natural world and are not as harmful as most people think. For example, in the village of Mamuju, Sulawesi, natural radiation from minerals are generally higher than the background radiation, yet the local villagers show no ill effects. Nuclear reactions can be engineered and controlled, applied in numerous fields such as material testing, medical applications, food preservations, farming (through genetic manipulation, etc. The applications are limitless, and not to mention as a sustainable power source with very little green house gas emissions.

The importance of providing knowledge about Batteries, Renewable Energy, and Electric Vehicles is a major…

In order to strengthen supply chains, especially from the upstream battery sector, the National Battery…